The world’s top 10 most expensive properties 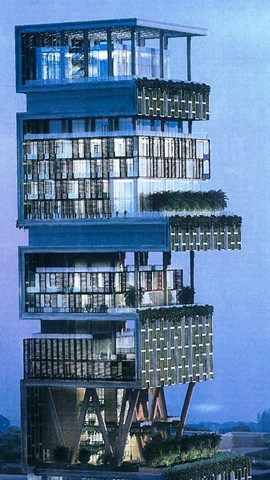 When we see Cribs or watch doorstep celebrity interviews, or accidentally (ahem) catch the tail end of Keeping up With the Kardashians, we all have to mentally readjust to lives lived in huge, white rooms, beside swimming pools, where people routinely spend a million dollars or more on a house that could, at a pinch, house the 82nd Airborne (the SEALS could train in one of the many attractive swimming pools). But even these are small fry, comparatively speaking. Heres the list of the real big leagues, the ten most expensive properties on the planet.

Yes, really. Draculas castle has had all traces of Bela Lugosi and Tom Cruise carefully removed and replaced by a museum of mediaeval art. And it isnt Draculas castle, because Dracula was an invention of Bram Stoker. It was Vlad the Impalers castle, briefly. Unlike the run of the mill gated community mansion, close to a golf course and sporting a built in gym and six garages, Vlads old haunt is perched atop a 200 foot high rock in the middle of a pine forest in eastern Europe, and isnt really convenient for anything. It does have 57 rooms and several underground passages, and bats fly around it at twilight. Vlad died in 1476 but the castle dates to the 1200s when it was built by the Order of the Teutonic Knights to repel the Slavic hordes. But things have changed and nowadays the castle is open to anyone who can afford the $135 million pricetag.

Updown Court is built on a 58-acre estate, and it features over 100 rooms, a private cinema and a bowling alley. So far, so luxury home, albeit on a gigantic scale, but Updown Court also has squash and tennis courts, stables and a heated marble driveway leading to enough parking space to park eight limousines, in case you have people over. Its larger in area than Hampton Court and Buckingham Palace, and its website proclaims that it is the most expensive private residence in England, at $139 million.

Spelling Manor is the brainchild of Petra Ecclestone, the daughter of Bernie and a billionaire in her own right. Her home, situated in Holmby Hills, Los Angeles, CA, cost her $85 million – canny dealing on Ms. Eccloestones part, since the list price was $150m. Despite its French Chateau stylings, Spelling Manor dates from 1991 and takes its name from a previous owner, the television producer Aaron Spelling. The 5,248m2 house, situated in a 4.6 acre estate, is the largest private home in Los Angeles county, where the competition is stiff. The Spelling Manor has 14 bedrooms and 27 bathrooms, a bowling alley, a beauty salon and even a gift wrapping room, as well as a citrus orchard and parking for over 100 cars.

Montana is one of Americas emptiest states, and a popular place for hunting trips and holiday homes. Its home to the Yellowstone Club development of exclusive, billionaires-only homes and private ski and golf community. The home of Tim and Edna Blixseth, who own the Yellowstone Club, its relatively small with only ten bedrooms, but its $155 million pricetag is explained by underfloor heating throughout which extends to a heated driveway, fireplaces in all bedrooms and a huge wine cellar.

This six-storey Belgravia property has 20-foot ceilings, luxurious fixtures throughout and more than 21,000 square feet of living space. Its jointly, along with Spellings Manor, the most expensive currently marketed home in the world, offered for sale at $161 million. Owned by Lebanese developer Musa Salem, the home was bought on a long lease from the Grosvenor Estate, and the sale was conditional on the house being restored to its Victorian glory. It seems unlikely that the London of Dickens, Holmes and pea-soupers had basement swimming pools, gyms and home theatres. Franchuk Villa may have classical beauty on the outside but once you�re past the door, its a mix of traditional charm and modern amenities.

In 1976, this gigantic spread was bought by lawyer and investor Leonard Ross, who said he wanted a lifestyle change. What he got was an estate comprising six separate residences, three swimming pools, eight fireplaces, a tennis court and 29 bedrooms, spread out across six acres of land in the area of Beverly Hills known as the Platinum Triangle. The mansion was formerly the property of newspaper magnate William Randolph Hearst, which goes some way to explaining why it has a nightclub on the grounds. If you can find the $165 million the Hearst Mansion is worth, and Mr. Ross feels like selling, youd also get Tom Cruise and David and Victoria Beckham as neighbours, as well as the inner glow that comes from owning the most expensive piece of real estate in the USA.

Fair Field is named from Fairfield Pond, which is adjacent to the property. Combining in its Italianate design the grandeur of an English country house with Greco-Roman stylings, and set in an estate of 63 acres, the main home consists of 66,000 square feet of living space with 29 bedrooms and 39 bathrooms. Outside youll find squash and tennis courts, a swimming pool and numerous other amenities redolent of a bygone age, including landscaped gardens. The price reflects the luxury and size of the place, though – its valued at $170 million.

Finally, our medallists. Weve seen Beverly Hills mansions, isolated Montana retreats and London townhouses, but here are the three most expensive homes in the world.

Penthouses are a class of property. When you can just call your home The House and everyone knows what you mean, its probably something out of the ordinary. And The Penthouse is definitely that. Its the most expensive flat in the world, and its living space works out at GBP6k per square foot. Its the prestige apartment at the Number One Hyde Park address and its security is second to none: it has bulletproof windows, panic rooms and iris scanners, and even a secret tunnel to the nearby Mandarin Hotel. All of which is likely to remain forever unused, since the building is guarded by the SAS.

The building boasts communal spas, squash courts, and wine tasting rooms, and the apartment itself has 24 hour room service, floor-to ceiling refrigerators and views over some of Londons most picturesque – and expensive – skylines. And it can all be yours, for $200 million.

Situated on the French Riviera, the Villa Leopolda comprises 29,000 square feet of interior space, and the doors open onto manicured lawns, a landscaped garden, parkland, managed woods, a swimming pool and the best sea views in the South of France. Its 10 acres of immaculate grounds run right to the desirable resort of Villefrance. It was originally built for the mistresses of the notorious Leopold, king of Belgium, but in more recent years has been home to banking magnate Edmund Safra, Bill Gates and Fiat tycoon Gianni Agnelli. The second most expensive home in the world is valued at $506 million.

Finally, the gold medallist. After trawling the Hamptons, France and even Vlad the Impalers old castle, we arrive at last at the worlds most expensive private residence. Wipe your feet.

Antilla is well on its way to being a small town. Its a 27-storey skyscraper with 40,000 square feet of living space, 570 feet above ground level. Its owner, Mukesh Ambani, is the head of Mumbais petrochemical giant, reliance Industries, and he takes his work home with him: there are six floors of parking, to accommodate his collection of 168 luxury cars. The design was intended to allow the maximum possible sunlight and offers views of the Arabian Sea, with Mr. Ambanis wife Nita describing the residence as an elevated house on top of a garden.

The amenities on offer are extreme even by the standards of this list: the building has nine elevators and three helipads, a 50-person home theatre and the staff of over 600 is still growing. But if you want to take Mr. Ambanis place youd better start saving: the property is valued at $1 billion, firmly establishing Antilla as the worlds most expensive home