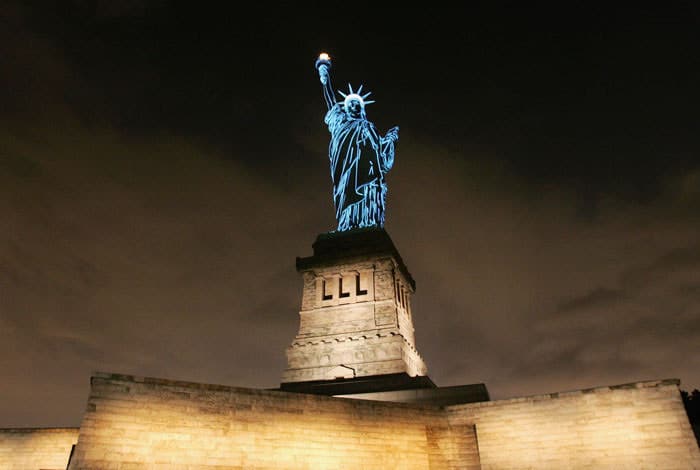 No, Miss Liberty of Statue of Liberty fame wasnt always imagined as the scowling, linebacker-throated Midwestern matron of steely spiky Germanic stock that she is today. She was supposed to look like an Arab peasant, robed in the folds of Muslim precepts. She wasn’t even supposed to be eternally standing at the entrance of New York Harbor, warning new arrivals to the New World about New Jersey to her right. Thats all schoolbook revisionism designed not to traumatize young American pupils with the reality behind Liberty: that she was supposed to be the welcome maam at the entrance of the Suez Canal in Egypt, that her name was supposed to be either Egypt or Progress, and that the flame she was brandishing was to symbolize the light she was bringing to Asia, which had claims to newness all its own.
Lighting the Way to Asia

All this from the imaginative scruffles of Frederic Auguste Bartholdi, the Alsatian-French sculptor whod fallen in love with his own Orientalist fantasies about the Middle East after a trip to Egypts Luxor spreads in 1855. He liked Egypts colossal sculptures, those “granite beings of imperturpable majesty” with their eyes seemingly “fixed on the limitless future.” He liked just as much the then-fashionable notions of Europeans thinking themselves the “Orient”s best thing since unsliced baklava. Bartholdi returned to Egypt in 1869 with the blueprints for a toga draped giant of a woman whod double up as a lighthouse at the entrance of the Suez Canal, which opened that year to fanfare and (British and French) stockholders delight.

The Suez Canal may have been in Egypt. But Egypt wasnt reaping its monetary benefits. The American Civil War had done wonders for Egyptian wealth thanks to the blockade of Southern cotton, which turned Egyptian cotton into gold. But the price of cotton crashed after the Civil War and so did Egypts economy. Suez revenue could have picked up the slack. Instead, it went into the pockets of European investors (until Egypts Gama Abdel Nasser nationalized the waterway in 1956, to the disingenuous fury of France and Britain).

From Lady Egypt to Lady Liberty

As Bartholdi was sketching one likeness of his great statue after another, it became apparent that his plan would never get Egypts financing. Bartholdi was crushed. He sailed to New York. And there, as his ship was entering New York Harbor, he saw Bedloes Island, deserted, oval shaped, perfectly positioned to bear his creation. She wouldn’t be Egypt. But she’d still be Bartholds. He worked out an arrangement with Gustav Eiffel to build the statue in 350 pieces in Paris, for the French government to pay for the statue (that was back when French and Americans had more respect than reproach for each other), and with American donors to pay for the 89 foot pedestal. Bartholdis goal was to have the dedication coincide with the centennial of the American Revolution, somewhere around July 4, 1876.

It happened a bit later, on Oct. 28, 1886, with a military, naval and civic parade in Manhattan, ending at the Battery at the tip of the island, with Gen. Charles P. Stone, who as the statues American engineer, was essentially its midwife, was the parade’s grand marshal. She was no longer an Egyptian woman. She was “Liberty Enlightening the World.”

The weather did not cooperate. The rain was so bad that a New York Times editorioal called it “almost a national misfortune” that “robbed the pageant of much of its effect.” Not that U.S. President Grover Cleveland was going to miss a chance to make himself slightly immortal by association with Lady Liberty as he accepted “this grand and imposing work of art,” though in words of granite neither grand nor imposing: “This token of the affection and consideration of the people of France assures us that in our efforts to commend to mankind a government resting upon popular will, we still have beyond the American continent a steadfast ally, while it also demonstrates the kinship of the republic.” At that point the historical record notes that there were loud cheers, not least those wondering who wrote that stuff.

But Cleveland got a bit more colorful in his next salvo “We are not here today to bow before the representative of a fierce and warlike god, filled with wrath and vengeance, but instead, we contemplate our own peaceful deity keeping watch before the open gates of America.” Well, the battleship Tennessees warlike batteries, which had just boomed, notwithstanding. “Instead of grasping in her hands the thunderbolts of terror and of death, she holds aloft the light that illumines the way to mans enfranchisement.” More cheers. Libertys light, he concluded, “shall pierce the darkness of ignorance and men’s oppression until liberty shall enlighten the world.”

Of Egypts inspiration in all this, not a word. The majority of the hundreds of thousands of immigrants from the Middle East, Egyptians among them, would never know the statues genesis, only their own. And their own, to this day (even though they’ve long ago stopped sailing into New York Harbour as immigrants), remains one mired in the authoritarian, un free grasp of regimes from the Hindu Kush to West and North Africa that have yet to see the light Cleveland spoke of, and Bartholdi imagined.

One last irony Bedloes Island was not officially renamed until many years later, when it became Liberty Island. The year? 1956. Gamal Abdel Nasser must have smiled.