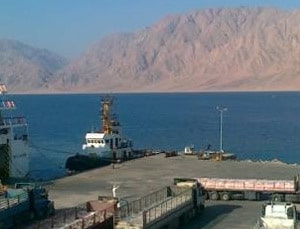 The Hurghada port and the first phase of the newly developed Safaga port will be inaugurated in June, the Ministry of Transportation announced late Monday in an official statement.

Head of the Red Sea Ports Authority (RSPA) Hassan Fallah also pointed out that 95% of the ongoing developmental projects in Hurghada ports have been completed. Minister of Transportation Ibrahim El-Demeiry visited the Hurghada port early Sunday, where he stressed on the necessity to complete all ongoing projects.

The minister added that the Hurghada port will include first class lounges for travellers and a shopping mall. Fallah stated that projects will be implemented in the Hurghada port in order to transform it to an international touristic port.

The RSPA head did not specify when the projects implementation will commence, however. The minister highlighted that the Hurghada port still requires a connection between Luxor and Aswan, in the form of a “cruise station”. This station should offer transportation to tourists via a “high-speed train” in Luxor, allowing them to visit pharaonic monuments, he said.

In March, the RSPA issued two international public bids for projects in the Safaga Port, located in the Red Sea Governorate, and the Al-Tour port in South Sinai. Earlier this month, the RSPA announced the implementation of new projects in the Adabiya and Tawfik ports with the aim of stimulating both domestic and foreign investment opportunities.

In February, the transportation ministry earmarked EGP 67m to dredge the Damietta Port in order to accommodate giant ships. As part of a joint operation between the Damietta Port Authority (DPA) and Suez Canal Authority subsidiary Timsah Shipbuilding Company, around 1m cubic metres will be dredged to contribute to the project.