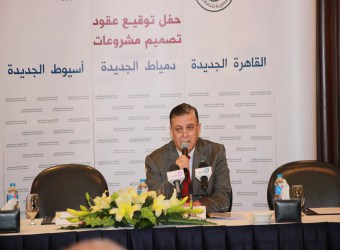 In Egypt, property developers are reporting unprecedented activity as a result of residential projects and regeneration developments, many of which are being jointly funded by overseas governments.

With essential construction work still required to deliver high profile housing and infrastructure initiatives, the real estate industry is responding to increasing levels of demand following a recent decision by The Ministry of Housing to allow non-Egyptian governments to invest in local projects.

“Our company is continuing to break new ground in Egypts real estate & tourism sectors. Having established three projects in New Cairo, Obour and 6th of October cities, SECON increased its capital by $243 million in January 2015, which was equally paid by the Egyptian and Saudi Arabian governments. Works are planned to begin concurrently in the three new projects valued at EGP 2.8 billion. We expect to deliver the three projects within just 36 months.”

Keen to align with Egypts vision to develop the new cities collaboratively, SECON have also announced the development of the countrys first hotel to be owned by both Egyptian and Saudi governments;

“Our biggest aspiration for Egypt’s future is the EGP 1.8 billion SECON Nile Towers Comprising two 23-storey towers. One will be home to the latest addition to the Hilton portfolio in Egypt, the five-star, 256-room Hilton Maadi. The other will incorporate 190 luxurious residential units that should be finished by the end of 2016.”

These milestone announcements coincide with a recent visit to Egypt by Chinese President Xi Jinping, during which a number of agreements and a memorandum of understanding between the two countries was established and Jinping explicitly encouraged Chinese companies to participate in Egypts major projects, including developing the Suez Canal Corridor and building a new administrative capital outside of Cairo.

As Egypt continues to extend the hand of cooperation to foreign governments who are aligned with its investment potential, the countrys real estate pipeline is becoming ever more occupied.

Ayman Ismail, Partner – Chairman and CEO of the leading Egyptian private property development company Mountain View explains “Over the last few years, we went through many crises; from the financial crisis in 2008 to the two revolutions in Egypt. Through all of these crises, the real estate business has proved its ability to grow. To me, this is not a surprise, because the fundamentals of the industry are very strong. We have real demand, not some kind of speculation witnessed in places like Dubai before their crisis. Our growing population is an asset.”

Ahmed Hassaballa, Associate Partner and Director of Operations at John Fotiadis Architect in New York and forthcoming speaker at the Cityscape Egypt Conference, which takes place from 5-6 April 2016at the Four Seasons Nile Plaza elaborates; “Geopolitical changes in the Middle East are driving investors back to Egypt as they look for a renewed and stable market. Cityscape Egypt provides an excellent window into that marketplace and the potential investment opportunities that exist there.”

With property proving to be less volatile than alternative forms of capital investment, Cityscape Egypt, now widely regarded as a key barometer of real estate activity in the country,is reporting a record number of showcases, attendees and projects sold.

Cityscape Group Director Wouter Molman states “Last year saw our most successful event to date and on the back of this success, exhibitors have been unwavering in their appetite to repeat or increase their presence at the forthcoming April edition. We are reaching the point where we are having to turn clients away, subject to the size of stand required. We are doing our best to maximize space at the current venue in a bid to meet demand for property showcases.”

Underlining the importance of the annual real estate event, international real estate advisory firm JLL referenced Cityscape Egypt as an attributor to residential activity in its Cairo Market Overview, stating: “Many developers are using this as an opportunity to launch new projects. With over 100 exhibitors and more than 13,300 attendees, the exhibition provides the opportunity for developers to interact with potential home-buyers.”

Cityscape Egypt is held under the auspices of the Ministry of Housing, Utilities and Urban Communities, with PACT Real Estate signed up as Silver Sponsor.