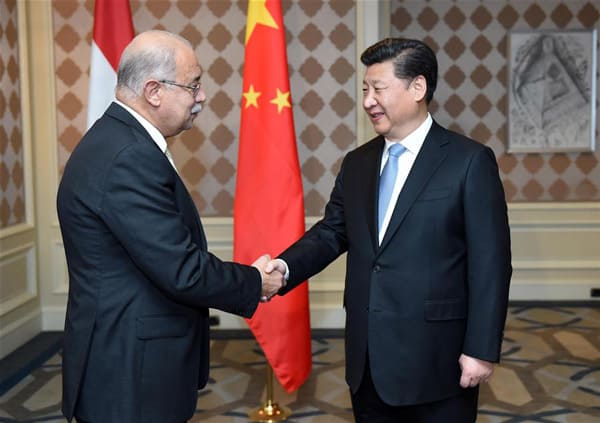 Xi made the remarks as he met with Egyptian Prime Minister Sherif Ismail at a hotel in downtown Cairo. The Chinese president arrived in Egypt Wednesday afternoon for a state visit.

“My visit to Egypt is to cement and deepen the China-Egypt relationship in an all-round way and advance practical cooperation between our two nations for new achievement,” said the president.

“China and Egypt are true friends and good brothers,” Xi said, adding that the establishment of a comprehensive strategic partnership in 2014 lifted bilateral ties to new height.

Noting that the China-Egypt relations face unprecedented opportunities and broad prospect, he proposed that the two sides make more efforts to link up their development strategies and step up cooperation within the framework of the Belt and Road Initiative, so as to turn their consensus into concrete results as soon as possible.

The president also suggested the two sides promote exchanges between their youths and encourage more tourists to visit each other’s country.

Echoing Xi, Ismail said Egypt cherishes the traditional friendship with China and will bolster cooperation with China in various fields.

The prime minister said Egypt supports the Belt and Road Initiative and will play an active role in the cooperation within the framework, becoming a corridor connecting trade between China and Europe.

During the meeting, Xi and Ismail also agreed that the two countries should strengthen coordination in international affairs.

After their meeting, Xi and Ismail visited a China Science and Technology Exhibition, in which 15 Chinese enterprises participated.

Later on Wednesday, Xi met with 10 people awarded for their outstanding contribution to the China-Egypt friendship, including former UN Secretary-General Boutros Boutros-Ghali.