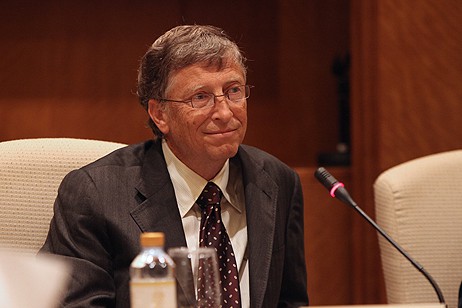 Bill Gates, the founder of Microsoft and Americas richest man, has joined a band of international investors staking as much as US$2 billion (Dh7.34bn) on Egypt’s future with a major investment in one of the countries biggest construction and fertilizer companies.

Mr Gates and a group of American investors bought $1bn worth of shares in OCI, a new company to be listed in Amsterdam.

Until the deal was struck OCI was the fertilizer subsidiary of Orascom Construction, a group controlled by Egypt’s powerful Sawiris family, and the biggest listed company in the country. The Sawiris family has a major influence over virtually all sectors of the Egyptian economy with interests in everything from telecoms to construction and gold mining.

Nassef Sawiris, one of the families youngest sons, controls Orascom Construction and is said by Forbes magazine to have a net worth of about $5.5bn. As such he is understood to be Egypt’s richest man.

His brother, Naguib Sawiris, founded companies including Orascom Telecom and is said to be Egypt’s second-richest man with a net worth of $2.5 billion. He is said to be returning to Egypt after reportedly settling differences with the ruling Muslim Brotherhood.

In all, the OCI deal attracted $2bn of investment from all over the world and represents the largest inflow of foreign capital into an Egyptian outfit since the uprising that led to the fall of the former president Hosni Mubarak in January 2011.

The deal led by Mr Gates is also a major endorsement for Dubai-based Abraaj Capital, which owns a 6 per cent stake in Orascom Construction. The Sawiris family owns a 54 per cent stake.

The deal is quite complex and involves what is known as a share swap. Orascom Construction Industries said it had offered to exchange all outstanding global depository receipts – or shares listed overseas – for shares in OCI. The new company will begin trading on the NYSE Euronext exchange in Amsterdam on Friday – the second anniversary of Mr Mubaraks fall from power.

The company is also planning a listing in New York and hopes to maintain some sort of listing in Cairo, perhaps through a depository receipt scheme.

The transaction also includes an offer to buy all of Orascom Constructions ordinary shares in exchange for OCI shares or 280 Egyptian pounds of cash per share.

Mr Gates funded the deal through his Cascade Investments vehicle. Cascade was joined by fellow American investment firms Southeastern Asset Management and Davis Selected Advisers. The Sawiris family and Abraaj also took part in the tender and are understood to have accounted for the lions share of the remaining $1bn investment after the Americans.

“The transaction underpins genuine investor appetite to invest in Egypt,” said Nassef Sawiris, who was the chief executive of Orascom and will be an executive director of OCI. “Unlike local shareholders who monitor events on a daily basis, sophisticated investors see the evolution of democracy having a long-term positive impact on the economy.”